FPD Executive Management is responsible for the management and delivery of GSFC flight project missions and mission support, including... 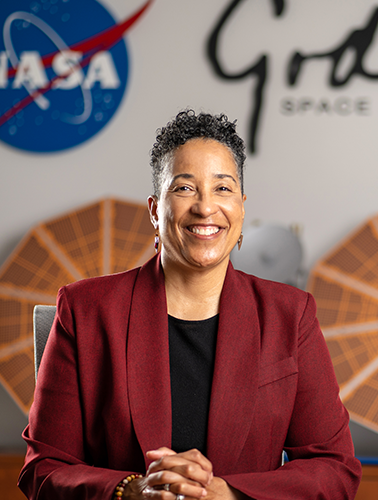 Ms. Simmons’ career began in 1982 as a U.S. Air Force 2nd Lieutenant in the Office of Special Projects; and was distinguished with the Air Force Meritorious Service Medal with recognition by the Under Secretary of the Air Force for an innovative operational concept that enabled faster and more efficient national defense threat assessment. After the Air Force, she worked at Unisys Corp; and then for the Iridium Program supporting launches of 82 satellites within one year receiving awards for her design of a new on-orbit assessment technique for a Low Earth Orbit, multi-satellite, cross-linked constellation with 24/7continuous real-time downlinked data. From 2000 to 2009, she was an engineer for international and DARPA missions in addition to supporting Goddard missions including GOES L/M/O/P, Lunar Reconnaissance Orbiter (LRO), Global Precipitation Measurement GPM) and Sample Analysis at Mars (SAM). In March 2010, she was selected as Instrument Project Manager for DESDynI; Astro-H/Soft X-ray Spectrometer (SXS) in 2011; and then in 2013 for ICESat-II/ATLAS. More recently, she was Code 550 Division Chief and then Deputy Director for Planning and Business Management in the Engineering & Technology Directorate. April of 2021, she was selected for the Deputy Director of the Flight Projects Directorate (FPD) at NASA’s Goddard Space Flight Center. In her career, she has supported 21 launches for NASA, DoD and industry. She is a Women@NASA Honoree (2014), Goddard Senior Fellow and 2016 Samuel J. Heyman Service to America Medals (Sammies) nominee for her contributions to the country. She has received several NASA awards and honors including Agency Honor Silver Achievement Award, several NASA Exceptional Achievement Awards and Robert H. Goddard Leadership Honor Award for her leadership of instrument projects. 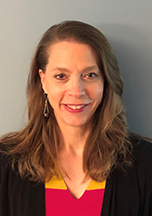 Cathy Richardson was selected as the Deputy Director of the Flight Projects Directorate (FPD) in February 2022 having previously served as its Deputy Director of Planning and Business Management (PBM) since April 2021. Cathy has supported the NASA mission for more than 30 years, with the last 20 years as a civil servant at Goddard with a focus on management and administration of programs and projects of national and international significance. She transitioned to FPD from a dual role with the Earth Science Projects Division, Earth Systematic Missions Program Office – Goddard, and the Reimbursable Projects Program, serving as the Program Manager and Associate Director from 2019 to 2021 and the deputy from 2016 to 2018. As an Instrument Project Manager from 2007 to 2012, she led the development of the TIRS instrument for LDCM and the ATLAS instrument for ICESat-2. She began her civil servant career as an instrument manager for several GOES-R instruments. 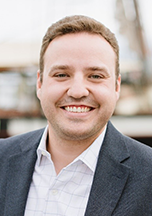 Matt Ritsko was selected as the Flight Projects Directorate Deputy Director for Planning and Business Management in June 2022. He will be placed in a permanent capacity following completion of the senior executive selection process.

He previously served as the Chief of Resources Management within the Chief Financial Officer and the Center’s Program Planning and Control focal point. Matt has supported the NASA mission in various roles since 2005 From 2017 to 2020, h served as the Program Business Manager for the Joint Polar Satellite System (JPSS) and the National Oceanic and Atmospheric Administration (NOAA) Business Branch Chief. Prior to JPSS, he served as the Deputy Project Manager for Resources for the Transiting Exoplanet Survey Satellite (TESS) and the Comet Astrobiology Exploration Sample Return (CAESAR) concept proposal, with additional experience with numerous flight projects (including TDRS, GEMS, and JWST).

Matt holds a Bachelors of Science in Economics from the Pennsylvania State University and a Masters of Business Administration from the University of Maryland. He has a certificate in Systems Engineering from MIT and Project Management from Georgetown University.